Soldiers from U.S. Army Alaska on Thursday unveiled a memorial for two soldiers killed during a rotation to Afghanistan.

The memorial is dedicated to Staff Sgt. David Thomas Brabander, 24, and Spc. Gabriel David Conde, 22. One died after injuries sustained in a vehicle rollover and one by small arms fire.

The brigade’s memorial was made of granite stone and bears the names of the two paratroopers. The unit is based out of Joint Base Elmendorf-Richardson in Anchorage, Alaska. 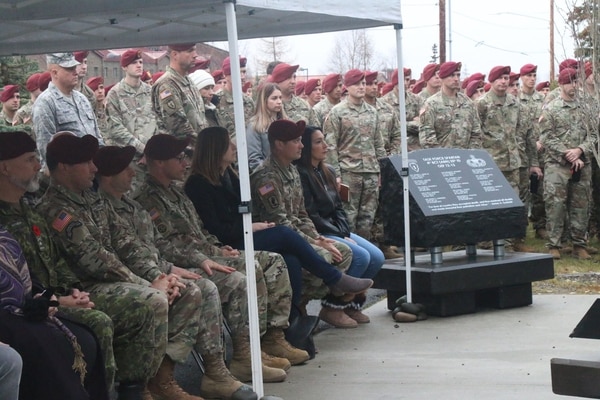 Brabander served as a squad leader in 3rd Battalion, 509th Infantry Regiment. He deployed with the brigade to Afghanistan in September 2017.

Brabander died from injuries sustained in a vehicle rollover accident in Afghanistan’s Nangarhar province on Dec. 11, 2017. Two other U.S. service members were also injured in the incident.

The soldier originally enlisted in March 2012 out of Anchorage, Alaska, and had been assigned to Army Alaska since November 2015. His previous assignment was in Hawaii.

Conde was an infantryman in 3rd Battalion, 509th Infantry Regiment. He also deployed with the brigade to Afghanistan beginning in September 2017.

Conde enlisted in August 2015 out of Loveland, Colorado, and had been assigned to Army Alaska since April 2016.

He was killed by enemy small arms fire in the tiny northeastern province of Kapisa, inside Tagab district, on April 30, 2018. Another soldier was wounded in the same incident.

Both fallen paratroopers were participating in Operation Freedom’s Sentinel — the U.S. military’s kinetic mission that runs concurrently with the NATO-backed Resolute Support train and advise mission.

The year 2019 has been the deadliest for U.S. forces since the mission to Afghanistan scaled down and changed names at the start of 2015.

There have been 14 hostile deaths for the Army alone, with 17 U.S. service members killed in action in total in 2019, according to Pentagon figures.